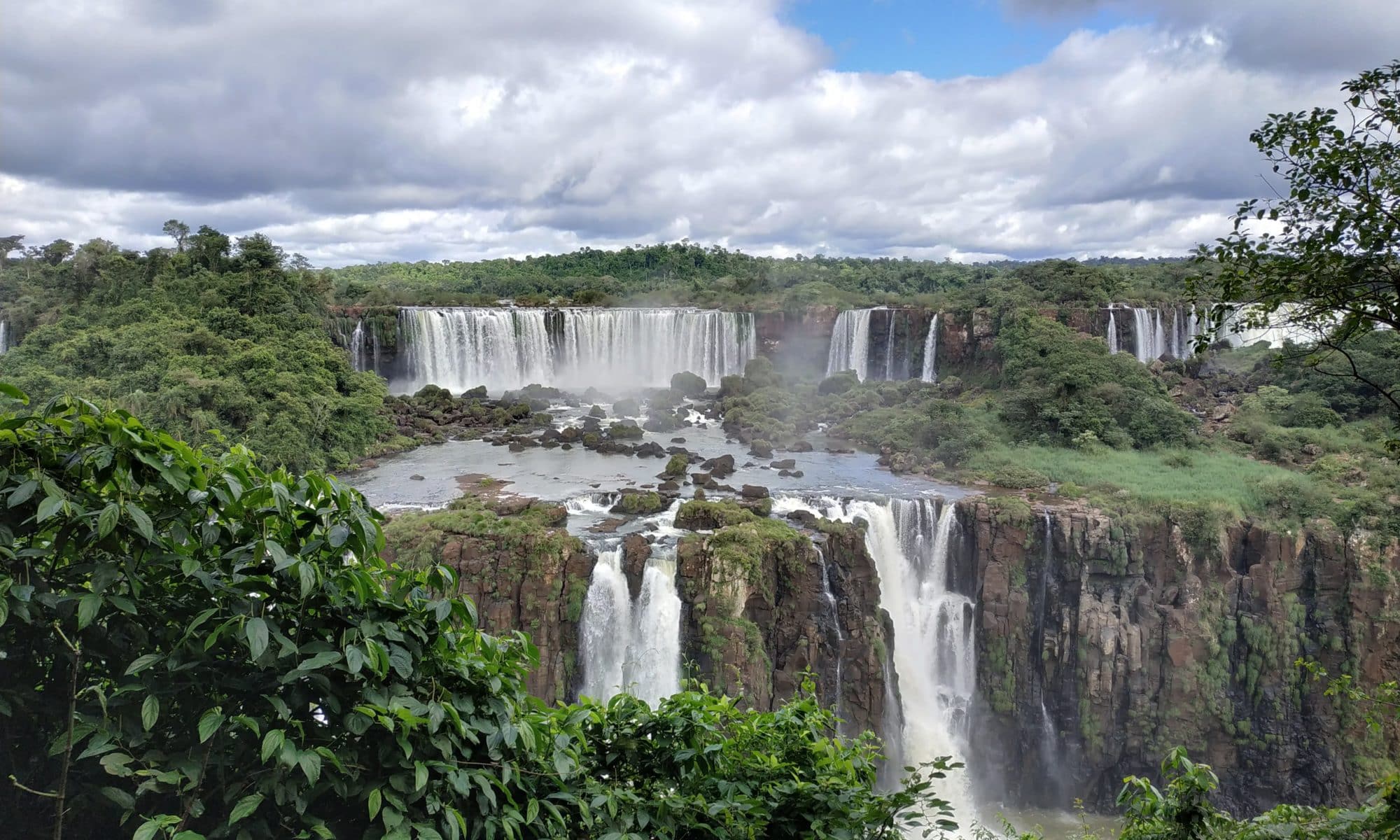 The falls of Iguazú are part of two different national parks in two different countries: Brazil and Argentina. The two towns closest to the parks are, respectively, Foz do Iguaçu and Puerto Iguazú.

We arrived in Foz do Iguaçu at around 9 am from Sao Paulo. We had a 17 hours bus ride behind us but the trip was much better than we expected. Since we succeeded to sleep a bit we were feeling good enough to go directly to the falls.

The price of the bus to go to the falls was quite similar to a Uber (around 26 reais, R$) but it would have take much longer to get there since you have to pass by the city center and change bus… So Uber it was!

The Brazilian side of the falls

We were glad to arrive there early since we avoided most of the crowd.

First of all we bought our entrance tickets and put our backpacks in a locker for a total of 170 R$. One of the lockers was big enough to fit our two filled-up 50L backpacks.

The visit of the park starts with a small bus ride along which they give you some information about the Iguazú falls and the surrounding nature. This way we learned, for example, that the falls are the largest in the world. They represent a rich ecosystem, in both flora and fauna. We could expect to see quite a lot of animals like the coatis, that looks like a combination between a raccoon and an opossum, or jaguars and puma, much more difficult to spot.

The bus stops at the beginning of the trail where you get the first view of the falls. We were so excited to finally see them!

Although this first view is amazing, it is not representative of the falls. We realized that 10 minutes later when we arrived at another view point. And each time we could see the falls, they seemed bigger and bigger and we got more and more amazed.

The walk ends in the Garganta del Diablo: the most impressive part of Iguazú! It’s a semicircle from which an impressive amount of water falls for 80 m at every moment. It is also the part were you get the most wet!

Along the way, we met some coatis. They were wandering around the people, looking for something to eat. They are really cute animals but, if you are not careful, they will steal the food that you left on the table. Some people told us the coatis even stole their cigarettes thinking it was food.

Although it may seems fun to feed them, it’s highly recommended not to. Some food could harm them and they might get aggressive among themselves and with other people. And do not pet them: they are wild animal after all!

The trail, the only one on the Brazilian side, is actually quite short. It took us around two hours to do it entirely, even if we stopped every five meters to take pictures of the falls, the coatis or even the butterflies.

For people who can’t do the trail, the bus can also bring you directly above the Garganta del Diablo where you can go down with a panoramic elevator and enjoy all the fun of getting wet!

The Argentinian side of the falls

At night, we negotiated with a taxi to bring us early to the Iguazú falls on the Argentinian side the day after for 100 R$. Perfect to finish all our Brazilian cash! Uber is not an option since the drivers do not cross the border. We discarded the bus because when you stop at the Brazilian border to get the stamp, the bus don’t wait for you. You have to wait for the next bus but you can use the same ticket for both buses, just remember to ask it to the driver before leaving. We also wanted to arrive as early as possible since we heard the park on the Argentinian side is quite big.

One new stamp on the passport and we arrived at the entrance of the park.

On this side, there was quite a lot of people queuing to enter, even during low season. It also smelled a lot of insect repellent as everyone was showering in it while waiting to get the tickets…

Once again we put our backpacks in the lockers, that were as big as the one in Brazil. To get one just ask at the shop. Each one costs 250 pesos (A$) that you can also pay with a credit card. You can also pay the entrance ticket with a credit card. In this case you’ll see three different operations, the total of which is the ticket price, 700 A$ for foreigners. Don’t worry about it, it’s normal.

In this park there are five or six trails to do, more or less long and complicated.

One agent of the park suggested us to start with the lower and upper trail in the morning and to keep the trail for the Garganta del Diablo for the afternoon. This way we would avoid the crowd and having the sun in our eyes when at the Garganta. Plus, we’ll have a nice light for our morning photos!

From the lower and upper trails, you can get several views on the many falls. You get a much closer look at them than from the Brazilian side.

The weather was perfect and we also caught quite a lot of rainbows along the way!

Before lunch, we took the small train to the Garganta del Diablo (included in the entrance tickets). While waiting for the train we saw other coatis, a lot of them actually, attracted by the food.

To arrive until the Garganta, after leaving the train, you still have to walk on a walkway on the Iguazú river for around 1 km. Thanks to it you can arrive right on top of the biggest falls, and once again, you get completely wet.

After lunch we took the small train back to the entrance so we could start the Macuco Trail. This trail, quite long, is less about the falls and more about the fauna.

At the beginning, apart from really big spiders above our heads, we didn’t see anything. And just when we were about to give up on seeing any nice animals, we saw an iguana. Unfortunately, it went away really quickly so we couldn’t take any picture.

Five minutes later, we saw a few people looking up with their cameras ready. When we arrived, we saw some monkeys in the branches! So cute!

Finally, some time after, back on the trail, we heard something moving in the branches. After some searching we saw a beautiful toucan.

At the end of the trail there was a small fall where it was possible to take a bath. “Small” compared to the rest of the falls we saw that day, therefore still quite impressive.

There was already quite a lot of people so we decided to go after the butterflies instead of taking a swim. The butterflies in Iguazú are also really impressive. They come in many different sizes and color. Some of them even look like leaves when their wings are closed.

To finish the day we headed to the exhibition center next to the entrance, that was showing all the animals living around the falls.

We took our backpacks and waited for the bus to Puerto Iguazú. Our hostel was right next to the Hito Tres Fronteras. From there, you could see on the other river banks Brazil, on one side, and Paraguay on the other. At night, they even have a show with music, water and light which is really cool to see. We watched the show while eating our first empanadas! yummy!

In conclusion, we both preferred the day we spent on the Argentinian side because we could really see each of the many falls that forms the Iguazú system. But we both agree that the Brazilian side is not to be missed either since it gives you a nice overall view of the falls.