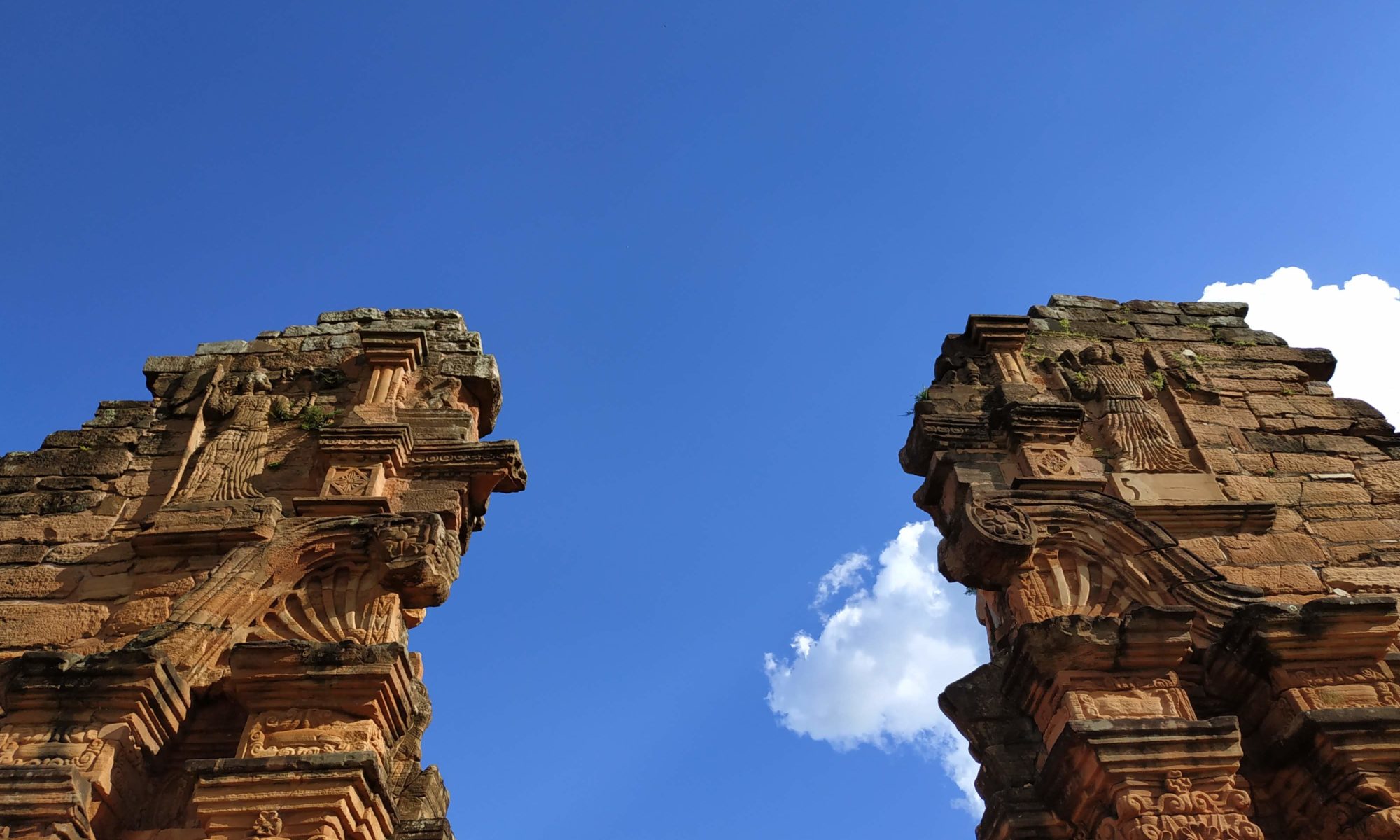 San Ignacio, in the Argentinian region of Misiones, is famous for the ruins of the Jesuit mission. It is also a good starting point to explore more ruins in the area and get to know more about the Guaranis, the indigenous population of the region.
To reach San Ignacio we took a bus in Puerto Iguazù. Luckily this time the ride was fairly quick, only five hours.

The bus terminal is located at the city border, at walking distance from the center. Still, considering the heat and our heavy backpacks, we were happy that our Airbnb host gave us a lift. While driving he showed us the main points of interest so it was easy for us to return afterward.

The ruins of San Ignacio Miní

After a quick lunch, we decided to head directly to the ruins of San Ignacio Miní.
San Ignacio Miní is just one of the many missions the Jesuits created in the area. The entrance to the ruins is 230 pesos (around 5.5€). The visit starts with two small museums explaining first the history of the missions and then the traditions of the Guaranis.

The missions were created by the Jesuits to convert the Guaranis. The community they established was way ahead of their time. Everyone was working for the common interest, with a day strictly divided in different chores, and art was playing an important role in their life. Plus, all the kids received an education until they were old enough to help. For the Guaranis coming to a mission was a way to avoid killing and enslavement, mainly from the Portuguese. The price of safety was a sedentary life, as opposed to their original nomadic lifestyle.

The missions existed for quite a long time but, in 1767, the Jesuits were expelled from the country. After few years, the Guaranis abandoned the missions and returned to a nomadic lifestyle.

Once in the ruins, you first enter in the area where the Guaranis used to live. Each family had its own house, more or less the size of a studio.

Later you arrive in the big central square. It was surrounded by workshops, a hospital, the Jesuits’ houses, and a cemetery. The most impressive part can be found right at the other end of the square: the old church. The huge door frame is still quite well preserved, as well as its thick walls.

They usually have a show at night in the ruins but unfortunately it was suspended when we passed.

On the second day in San Ignacio, we did a small excursion with a guide, Adrián, from Tierra Colorada Turismo in the park of Teyù Cuare, “lizard cave” in guarani. The full tour lasted around 3 hours. We walked uphill in a forest, reaching different viewpoints on the river Paranà, and on Paraguay on the other side. We learned about the history of the place as well. From when the Jesuits used to came here for a spiritual retreat, and to take the red rocks to build their missions, till today’s problems. The biggest of those is the presence of a dam upriver. For the past three years it has released a lot of water, submerging part of the river banks.

Adrián also showed us the flora, explaining which plants were used by the Guaranis as medicine or as tools. He also explained which animals were living in the park: lizards, tarantulas, armadillos, snakes, sometimes jaguars and many more. Unfortunately we could not see anything more than butterflies and birds, but big eagle as well!

At the end of the trek, Adrián brought us to a Guarani community. At first we felt out of place, like if we were invading their privacy. The situation changed when the chief arrived and, together with the guide, explained how they are living.
The Guaranis nowadays don’t have much help from the government and their territory is becoming smaller and smaller. To be able to buy the goods they cannot produce by themselves, they are mainly selling handcraft jewelry. They sometimes walk for up to four hours a day to reach the places where to sell their products. Most of them speak only Guarani. Part of the money paid to the agency for the excursion is then donated to the community. If you want to know more read our article on the Guaranis history and population (in preparation).

At the end of the excursion, Adrián brought us back to the city center. We asked him were we could go for lunch and he showed us a restaurant. “That one is not fancy, it’s for the locals to have lunch” “Perfect for us!”. The empanadas were super yummy!
We used the service of Tierra Colorada Turismo also to buy our bus tickets to Buenos Aires. In Argentina you should always go to an agency or a physical shop to buy your bus tickets. The price you can find online is full, but you can almost always get a discount if you ask directly. We ended up saving quite a lot of money!

Since we had some time before the bus, we had a pleasant conversation with Maicol, the creator of Tierra Colorada Turismo. They offer several others really nice excursions. For example, one is a day trip to Paraguay with a ferry ride and lunch included, to see other Jesuit missions.
Maicol told us that he was employing and training local people. Most of the tourists stay in San Ignacio for the day, visiting the ruins and then moving on. He is trying to create excursions so that people would stay more than one day in San Ignacio and, in doing so, helping the local economy.
We really liked the excursion and the agency and we would recommend anyone passing by San Ignacio to enjoy one of their excursion.

And, after this nice talk, we were back on a bus, for 15 hours this time, heading to Buenos Aires.