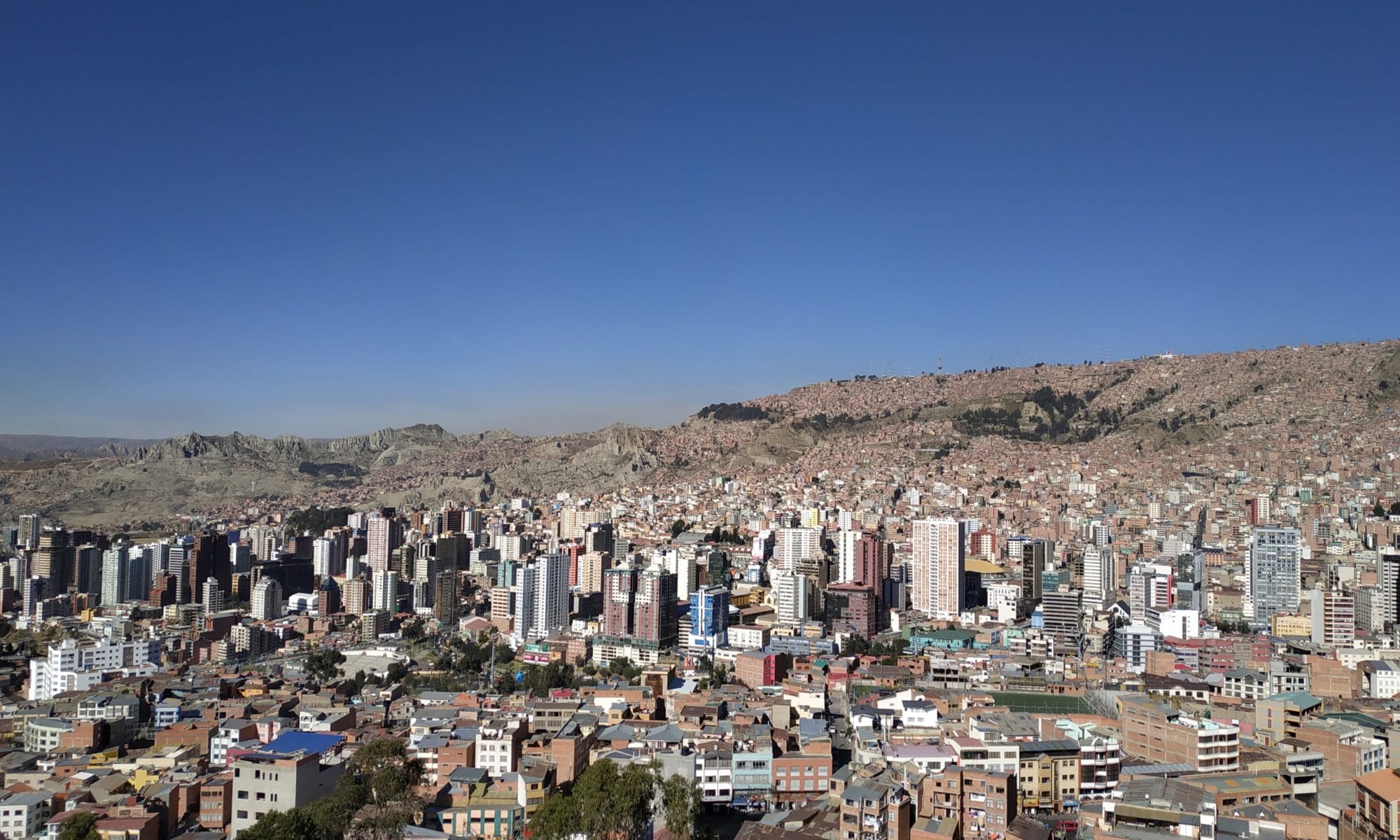 After Chile and Argentina, our adventures continued in Bolivia. We spent around 3 weeks in the country, but we could have stayed much more. Bolivia has amazing landscapes and you can do some really nice trekking and excursions.
But Bolivia also has some really nice cities to offer. Here is a description of three of them that we really enjoyed visiting: Potosi, Sucre and La Paz.

The first big city that we visited in Bolivia is Potosi. At an altitude of 4090 m, it is quite an experience to stay there. It used to be a very rich colonial city, where most of the money for the Spanish crown were created. However nowadays, it is mostly famous for being the city of the miners.

A lot of people come to Potosi to visit the mines of the cerro Rico, not far from the city. For personal reasons, we decided against it. The mines are still active (since the XVI century!) and people work there in the same conditions of the last century. We didn’t really feel comfortable to have a tour in the middle of people slowly dying because of their work (their life expectancy is around 40 to 45 years). Nevertheless, a lot of people go there as you learn a lot about the life of the miners and it can be quite an adventure (hot, lack of oxygen, narrow tunnels, etc).

Instead of visiting the mines, we decided to focus on the city itself. The city centre is quite far from the bus terminal but, even if you are staying for a short time, it is better to sleep there. It is really nice, with a lot of colonial buildings. We chose to stay a few minutes away from plaza 10 de Noviembre, the main square. During our stay we even saw a celebration where kids were re-enacting some historical event.

Quite close to the plaza, you will find the casa de la moneda, where they used to make the coins. The building is quite big and hard to miss. It is mandatory to follow a guided tour, organised all day long in Spanish, English, and French. The tour lasts more or less two hours and costs 40 bolivianos (BOB). Note that you’ll have to pay more if you want to take photos or grab videos.

The visit is really interesting as you get to know both the evolution of money fabrication and the history of Potosi. The guide even had an hypothesis about where the dollar logo comes from. Apparently, when the USA were created, they couldn’t create their own money so they had to accept the Spanish money, mostly created in Potosi. The dollar sign apparently comes from the overlapping of the S and I of Potosi. We don’t know if it is true but we quite liked the idea!

After our visit of the casa de la moneda, we headed to the mercado central. On the first floor, you will find a lot of options for very local meals. It is quite cheap and yummy, but you better prepare your stomach (it is the case for pretty much every market in Bolivia)!

After lunch, you can go to the Convento Santa Teresa. Once again, it is an organised visit for 15 bolivianos. This convent hosted mainly daughters of rich families, that had to pay a lot for them to be accepted. It has been renovated as a museum that explains how the nuns were living a few centuries ago. Their life was really strict and almost all contact with the outside world was prohibited.

If like us you decide not to visit the mines, one day is enough to visit the city of Potosi. On the contrary, if you plan to visit the mines you should stay one day more. There are plenty of agencies in the centre offering a tour of the mine, it is quite easy to plan.

Right after Potosi, we went down to Sucre, the constitutional capital of Bolivia. It is in this city that the country of Bolivia was created. If you arrive there after Potosi, you will notice quite a difference of temperature since Sucre is «only» at 2750 meters. It can get quite warm during the day and the city really invites the traveller to chill and relax for a few days. A lot of backpackers choose to stay there for a week or two to take Spanish lessons. Our Spanish is quite ok (we both lived in Spain!) so we didn’t take any class but we decided to stay around four days. We needed to recover from the almost three weeks of cold and high altitude we just had. A lot of hostel have nice patios, some with a garden and hammocks, perfect to rest!

Our hostel was a few meters away from the plaza 25 de mayo, which is the central square where all of Sucre comes to see and be seen. On one side of the square, you will find the liberty house (casa de la libertad). We highly recommend to visit it as it gives you a lot of information about how the country was created. After all, it is in that building that the declaration of independence of Bolivia was signed!

On another day, we also went to the Charcas museum. This museum is divided in three parts:

But most of our time in Sucre, we just spent it wandering around in the city, the parks and of course, the market.

La Paz is one of the biggest cities of Bolivia. At around 4000 meters and stuck between the mountains, the city has a lot to offer.

Luckly for us, we had already spent more than one month at high altitude so we were used to it. If you start your trip directly in La Paz, take into account that you will need a few days to adjust to the altitude.

We found a hostel in the center, just next to the witches market (mercado de las brujas). It is a market of witchcraft were you can find a lot of unexpected products like lama fetuses. The market is quite small but it is worth the detour. In the streets around, you can also find a lot of souvenir shops where you will for sure find something of your taste.

A really nice thing to visit is also the museum of ethnography and folklore. The entrance costs 20 BOB and you can have a guided tour (included in the entrance ticket). We visited the museum quite early in the morning so we had a guide just for ourselves which was great since we could ask many questions. The museum is divided in different thematic areas: ceramics, ceremonial masks, rocks, textiles, and more. It gives a nice overview about all the different Bolivian civilisation.

There are many miradores where you can get a really nice view over the city. We decided to reach two of them. Firstly, we went to the mirador Killi Killi since you can walk until there from the city centre. Take it slowly, you will soon be out of breathe; remember that La Paz is quite high! Up there, there is also a nice square. You are not at the highest point but it already gives you a good idea of how big the city is.

That same day we decided to take a teleferico (cableway) to go even more up. There are a lot of telefericos in La Paz, each of them with a different colour, like metro lines. We took the red one, going to El Alto, a suburb of La Paz. From there, you are really dominating all of La Paz, plus the ride to go up is quite nice. A ride on the teleferico only costs 3 BOB.

A day in Tiwanaku

One last thing you shouldn’t miss when visiting La Paz, is to go and visit the ruins of Tiwanaku. Tiwanaku was a civilization that existed before the Inca. It is believed that they were quite advanced and that they created the first empire of South America. If you go there, we would recommend to go with a guide, either through a guided tour booked in La Paz, or by asking when arriving in Tiwanaku. Indeed, only some ruins remains and the guide explains a lot of things that you would simply miss if going on your own.

There are also two museums: the museum of rock art, were you can find some really impressive carved stones. One of them reminded us a little bit of the moais on Easter Island. The other museum displays all the objects that were found in the site and help understand this mysterious civilization.

From La Paz, you can also find a lot of nice hikes to do. It’s also a good place to organize a visit to the lake Titicaca.

To not miss any of our adventure subscribe to our monthly newsletter!