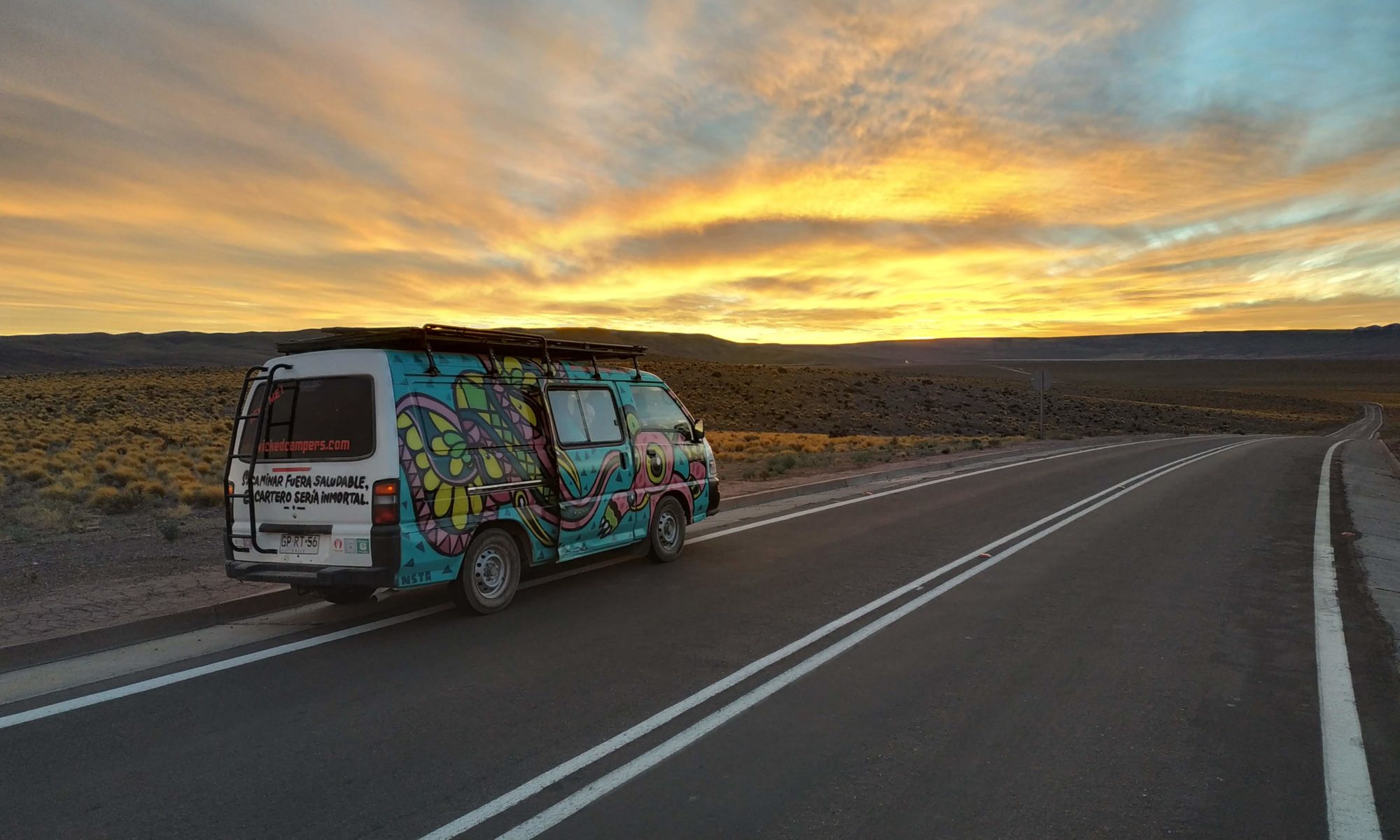 If you think about the desert, what is the first thing that come to your mind? A beautiful but rather monotonous series of sand and dunes, right? That’s at least what the majority of Europeans (us included) would say, given the vicinity of the Sahara desert. But, believe us, there is at least one desert in which you could spend five or more days and see different and amazing landscapes everyday: the Atacama desert.

How to get around

The main village in the area is San Pedro de Atacama. It has also the only bank and only gas station in the area. All the attractions are distributed around it, like the points of a star. So, it is only natural for you to either stay there or pass by there everyday. When you’re there, replenish your water supplies as well: after all you’re in a desert!

Given the remoteness and harshness of the area, San Pedro is very expensive. So, to cut the expenses, we rented a van from wickedvan. We were in six, three sleeping in a van, the other three in a tent outside. We could cooked every meal thanks to a small camp kitchen. Clearly we needed to pay for the gas but, given the distance of some of the sites, to visit them you would have to either rent a car for the day or pay for an organized tour.

So, all things considered, we think that renting a van, or a car where you can sleep, is a great way to explore Atacama. However, remember that the temperature can go really down during the night, especially at high altitude.

As soon as we took the van we headed straight south, to the salar (salt flat) of Atacama. As the vegetation start disappearing, the soil became more and more white from the salt. The landscape never gets as white and barren as in the salar de Uyuni, but it’s still really impressive.

If you want to camp you can do it at the very last tree on the already unpaved road. It’s the perfect spot to finish the day and where we spent our first night. Before that however, we continued exploring the salar.

In the middle of the salar, you’ll come across the laguna Cejar. It is a salted lagoon where you can take a bath. However the entrance ticket is pretty expensive (15000 chilean pesos), so we decided to continue until laguna Tebinquiche, the perfect spot to enjoy the sunset. Just before arriving to the lagoon, you’ll find the unmarked eyes of the salar. These are two natural and perfectly circular holes, filled with water, one at each side of the road.

After paying the entrance (2000 pesos), you can walk along the Tebinquiche lagoon. You will have to follow a predefined path in order not to alter the delicate equilibrium of the ecosystem. As the sun goes down we enjoyed the beautiful reflection of the surrounding mountains and volcanoes on the water. It was truly magical!

We started early our second day to go see the flamingos at the laguna Chaxa. The early morning is the best time of the day to see them since the tourists did not have enough time to scare them away. The entrance to this lagoon is 2500 pesos, however when we arrived there was nobody, so we entered for free! There are three type of flamingos that can be observed here: Chilean, Andean and of James. Even though we were not in high season, there were quite a lot of them!

Right after we headed to two high altitude lagoons: Miscanti and Miniques (5000 pesos). You need to drive for around two hours to reach them. There are two parking spots at the two lagoons, but you can also walk from one to the other. However, remember that you are walking at more than 4000 m so take your time.

If you continue along the road you can reach a splendid viewpoint over two other salars. After that you can return toward San Pedro de Atacama to spend the night.

The valle de la Luna is incredible, filled with otherworldly landscape. You have different parking spots from which different paths start leading to some viewpoint. We spent there more than three hours (lunch included) and we enjoyed every minute! Most of the time, we felt like we were in a Star Wars movie.

The valle de Marte is not far away. After a first part in which you drive in a narrow canyon, feeling like you’re in some sort of space safari, you’ll arrive to the dune. It is gigantic and, if you want, you can also sandboard on it through several agencies in San Pedro de Atacama. We continued walking until the awesome viewpoint over the whole valley.

To spend the night we went to the Rainbow valley. It’s a little far away and difficult to reach but it’s completely free. You have to pass a small river four times. If this is not a problem during dry season, it could become quite challenging if it rains. When we woke up, we were welcomed by a lot of different colors: green, red, yellow… They were all around us, and we were the only ones there at that hour!

Once left the Rainbow valley we headed to cerro Toco, a mountain in the area. From the top, at 5600 m, we could have had a superb view of the Licancabur volcano, as well as the ALMA radio-telescopes. However, when going up we were invited by a local to stop since they had problems with people stuck, trying to get down, with a van similar to ours. We then started walking: it was hard. Every step uphill was leaving us breathless. We managed in any case to arrive to 5150 m. Our van also managed to reach us there, driven by a couple of us that stopped walking earlier. It was the highest we have ever been and we felt proud to have reached it. But, due to the altitude, we ended up with quite a headache in any case…

To spent the night we headed to Guatin, a small village at 3000m, on the way to the geysers del Tatio. Just before the village there is a bridge and, before it on the left, you can find the perfect spot where to camp. From the parking you can walk in a small valley, filled with gigantic cactus, and enjoy the sunset.

One of the pros to sleep in the cactus valley is that you’re closer to el Tatio, so you can sleep a little bit more!

The geysers are more active at dawn, when the temperature change is bigger. However, since they are located at 4800 m, sleeping there is strongly discouraged. Before getting there, prepare yourself for an intense cold. But it’s all worth it: the geysers are amazing! There are so many of them, and they can reach up to 10 m. Included in the entrance ticket (15000 pesos) there is also the possibility of taking a bath in a thermal spring. However, for all of us, except one, it was really too cold to undress.

Once finished the visit we returned to San Pedro, stopping along the way to see all the amazing views we missed during our night ride to the top.

And just like that it was time to say goodbye to our van, our house for five days, and continue to the next destination.

To not miss any of our adventure, subscribe to our newsletter!