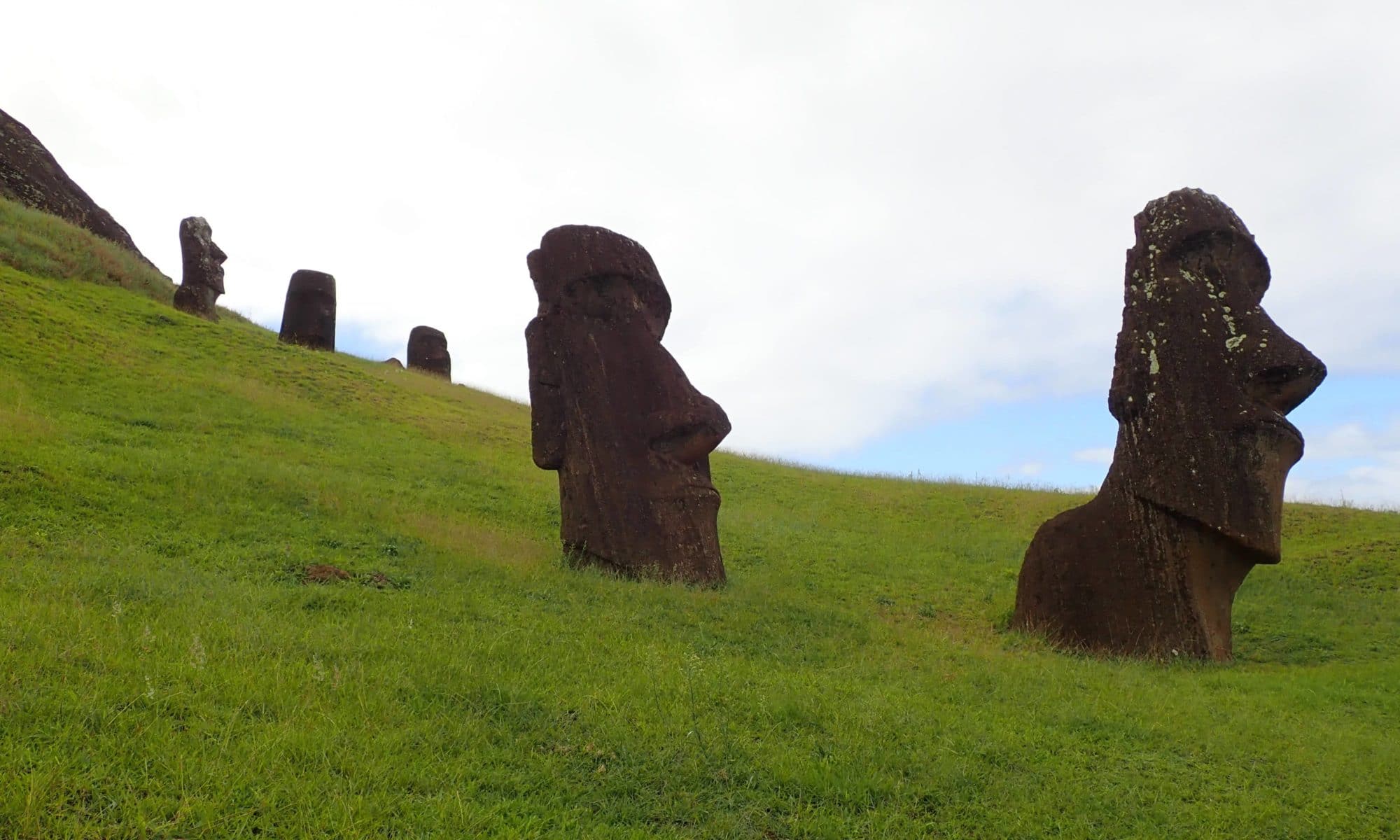 Rapa Nui, also known as Easter Island, is the most remote island on Earth.
You can get there only by flying from Santiago de Chile or from Polynesia, and the tickets are quite expensive. The cost of life on the island is also quite high since most of the products have to be brought by plane or by boat. For these reasons, planning a trip to Easter Island from Europe can be quite expensive.

If, like us, you have the opportunity to travel in this part of the world, then including a stop in Easter Island is a perfect way to limit the impact of the expensive flight tickets.
Another way is to bring your own food. In that case, make sure you book a place where you can cook! It is not a problem to bring food to Easter island but you are not allowed to bring back fresh fruits and vegetables.

Since this year, Easter Island also puts a limit on the number of people that can enter the island. Take into account that, before boarding your flight, you will need to demonstrate that you have a place to stay on the island. A confirmation of a hotel reservation will do just fine. We stayed in a camping as it was the cheapest option. At the beginning we were not really sure about our choice but in the end, the kitchen, bathroom and even our tent were big and clean.

Before starting the real visit of the island, you will need to buy a ticket to enter the archaeological sites. The good news is that you only need one, that is valid for 10 days, to visit all the sites on the island. You can come back as many time as you want on any site within those 10 days, except for Rano Raraku and Orongo that you can visit only one time each. You can find the tickets in the city center, on the main street, just look for the white and red flags. The bad news is that the ticket costs 80 US dollars… so don’t lose it!

The moais of Ahu Tahai

We arrived on the island in the afternoon and by the time we finished the check-in, we were just one hour away from the sunset. So we decided to walk along the sea until Ahu Tahai. Ahu Tahai is the closest place from the city centre where you can see moais (the famous statues of Easter Island) and also the only place where you can see a moai with restored eyes. Placing the eyes was the last step of the moai construction but most of them were lost. It is also the perfect place to watch the sunset as you get to see the sun going down right behind the moais. We were quite excited as we arrived there since these were the very first moais we saw! And the sunset was beautiful!

On our second day on the island, we decided to go on an organized tour. We hesitated a bit because we are not big fans of tours but it was the only way to understand more the places we were going to visit. As a matter of fact, the explanations you can find on the actual sites are quite poor. We were really curious about the history of this island and we wanted to discover as much as possible about it!
So we decided to take a full-day tour with Rapa Nui Travel and ended up really satisfied with our decision.
We were not many people on the tour and the guide, Noah, gave us all the explanations we wanted at every stop. It helped us also to appreciate even more our visits of the next days.

The village and the first moais

The tour started with a stop at a reconstituted village. Here we learned about their techniques to grow vegetables and to build houses.
We then visited the moais. Firstly, we headed to a site were they were all fallen, like most of them on the island. All the standing statues on the island were actually restored in the last 30 years.
After that, we went to Tongariki, one of the most famous and biggest site, with 15 moais standing. The moais are impressive and much taller than the ones we saw the night before. The tallest reaches 14 m high!

Rano Raraku: where moais were built

Just before lunch we headed to Rano Raraku, the volcano where the moais were carved directly in the rock.

This place has the highest concentration of moais, even though most of them are not finished. There are around 397 moais on the island, and at least 100 of them are in Rano Raraku. We can see moais at different steps of the process of fabrication. Some are still in the volcano, just barely shaped. Others are standing in pits where the back and the ears were supposed to be carved. The pits are now filled so you can only see the heads of those moais. And finally some are on their way to their destination site.

We talked about the different theories of transportation, since they were weighting several tons each. Either standing, with some ropes, or rolling on logs, the way they were moved for kilometres is still a mystery.

We also saw a one-of-a-kind moai, sitting on his lap and looking up at the sky. Quite different from the other ones by its shape, it is also farther away from all the moais of Rano Raraku. We do not know if it was carved before or after the other ones, and if it is the only one of its kind. Maybe more are lying under the earth that we don’t know about. Another mystery of the island!

After that, we went to Te Pito Kura to see another moai. It was the only moai not constructed for a nobleman but by a loving wife as a tribute to her deceased husband. The husband was a fisherman that was helping everyone by giving away for free any fish he did not eat. He was loved so much that, after his death, everyone helped to carve a moai for him. In this place, you can also find a “magic” rock which is said to have some sort of cosmic power. Our guide (and us) was quite sceptical about the magic properties of the rock but told us that a lot of people come here to get some of its energy.

Our last stop of the day was at Anakena beach, which is the only beach of the island. You can find some moais here as well and a legend says it is the place were the first Polynesian arrived on the island. We arrived there around 3pm of a very sunny day and the little swim we took was the perfect way to end the tour!

For the third day, we decided to rent a car. This way we could explore all the sites we missed the day before and be able to stop whenever and for how long we wanted.
The small Suzuki Jimny, really practical if you are 4 or less, are usually around 50 000 pesos per day, but we had a discount with the camping we were staying at. Don’t hesitate to ask your hotel if they have similar discounts for cars, quads or bikes, or even for some tours or shows.
We rented the car for 24h, the minimum on the island. It is actually perfect as you can explore all day long and still enjoy the car to go see the sunrise the morning after.

Among the many sites we saw that day, we explored:

We finished our exploration that day back in Anakena: it is really the perfect spot to refresh after a long day of visits.

The following day, we woke up at 5:15 to go to Tongariki in time for the sunrise. It is a famous thing to do and we saw a lot of cars going the same direction. There were A LOT of people there. Keep in mind that, in any case, the site does not open before 7am. The sunrise was not the most beautiful sunrise ever, but having the moais in front makes it quite cool! We arrived there before sunrise and stayed more than two hours before going back to the city centre to give back the car.

Once we returned the car, on our last day, we decided to hike until the volcano of Rano Kau. There is a nice path uphill and in one hour we arrived at the edge of the volcano. The view inside the volcano is quite impressive but you cannot go down as it is a protected area.

We then continue to visit the religious site of Orongo, where the celebrations of the birdman took place. This place is quite different from the rest of the island and it is the opportunity to learn even more about their traditions.

Sadly for us, after hiking under a beautiful sun, the rain started just when we arrived at Orongo. We waited half an our for the rain to stop to be able to discover the place and we only got 10 minutes to explore before the heavy rain started again. The houses they built there were impressive and the view, in a sunny day, must be striking (too bad for us). We waited a bit more to go back but since the rain was not stopping we asked some other tourists that came with a car to go down with them. After so much rain, the trek we did to come up didn’t seem like a good idea anymore.

If you have the occasion, when visiting the island, we would also recommend to go to a dance show. We went to see the Te Ra’ai dance show and we had an amazing time! First, at the entrance, they welcomed us with a glass of Pisco Sour and a spoon of ceviche. There is also the option of a tropical juice if you prefer something non alcoholic. A guy was also there to paint our face with traditional drawings.

The show begins with an explanation of the traditional costumes and their materials like sea shells, chicken feathers, etc. After that, we had a nice sample of traditional dances and musics of the island. The show tells a story, the story of Rapa Nui. Caroline had also a bonus: the dancers invited her on the stage with some other people of the public to dance with them!

All together, we had an amazing time on Easter Island. Buying the flight tickets well in advance and bringing our own food allowed us to spend more on exploration. There are much more things to do on the island and ou could easily stay a few more days. However four days like we did is perfect to learn about the history and explore the main places.

If you want to know more about the history and tradition of the island, we wrote a special post about it.

To not miss any of our adventures subscribe to our newsletter!

One Reply to “Easter Island: walking among the moais”