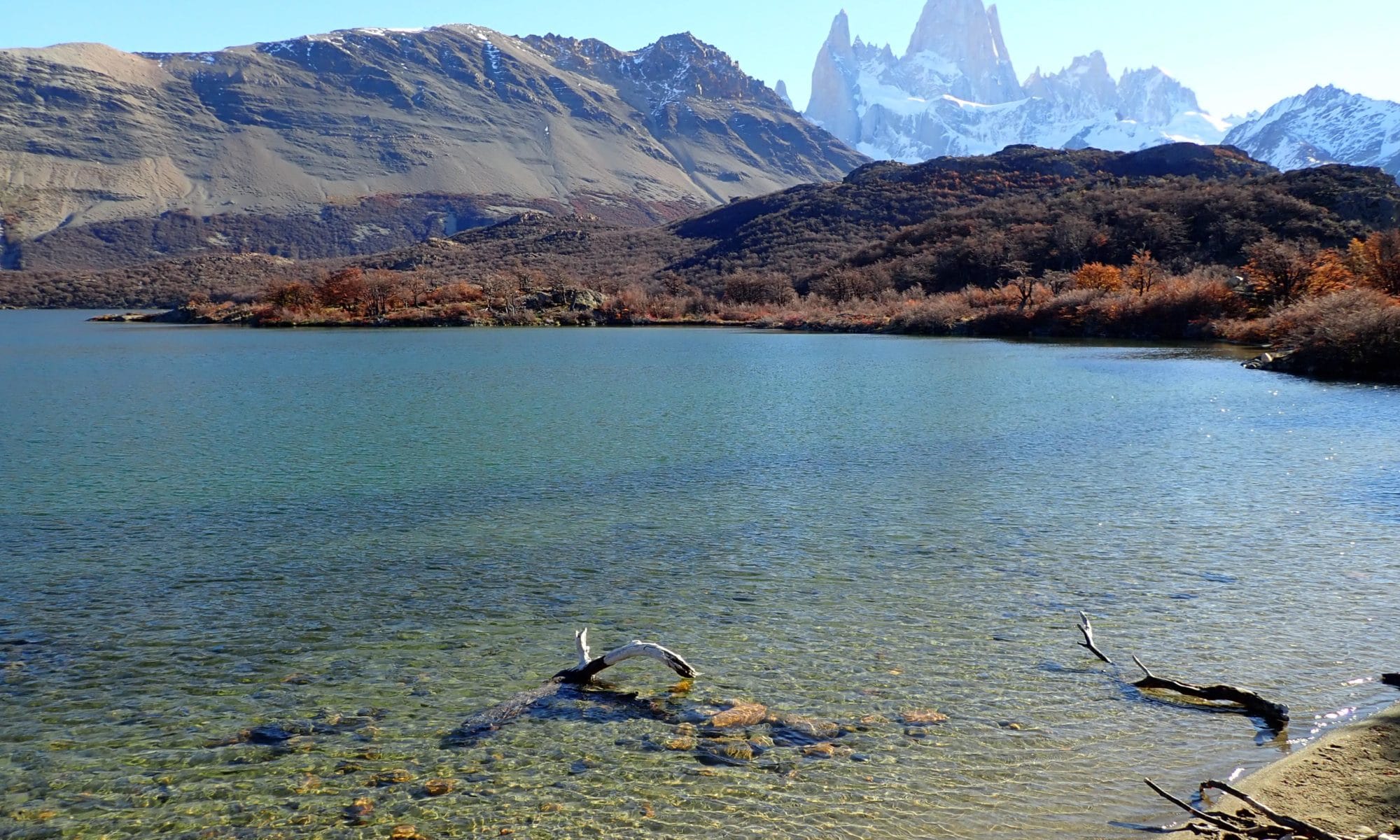 The parque nacional de los glaciares is an Argentinian national park covering more than 7000 km² of the southern Patagonia. As the name suggests it hosts several glaciers: the biggest of them is the Viedma, covering a surface of 977 km², equivalent to 9 times the surface of Paris. The most famous towns of the area are El Calafate and El Chalten. The first is famous for being the closest to the Perito Moreno, an impressive glacier, easily accessible by road. The second is instead the national capital of trekking.

We spent one week in El Chalten. We did only day-hikes since we didn’t have a tent and it was almost winter. But there are lots of them! The first thing you should do when in El Chalten is to stop at the centro de visitantes. Here they will give you a quick overlook of the different trails, in English or Spanish, and their conditions at the moment. You can also ask for the forecast for the next days, and you’ll get a free map with the main trails in the area! Remember that the weather on the mountains can change quite quickly, and strong wind gusts could make some hike quite dangerous. To check the weather you can also use the website wind guru.

The trails are all very well maintained and signaled, so even starting before sunrise was never a problem for us. Here are five hikes you can do in El Chalten (plus a bonus!)

The laguna de los Tres is maybe the most famous of all the hikes of El Chalten. And with a reason: the view you have on the mount Fitz Roy at the end of the walk is something amazing.

The trail, signaled as “Senda Fitz Roy” at the beginning, starts at the end of avenida San Martin, the main road of the town. It starts going uphill from the start and, after 1 km, you’ll reach the first view point over the Las Vueltas river. Three km later you’ll arrive at the mirador Fitz Roy, a privileged point of view on the iconic peak. We started walking more than one hour before sunrise in order to see the mountain becoming red with the first rays of light. It was an amazing experience. The few people that were there with us were all in an almost religious silence. If the weather allows it, take your frontal lamp and do the same, you’ll not regret it!

After the mirador the trail gets quite flat. For the next five kilometers you’ll walk among small ponds, rivers, and a free camping site in case you want to spend the night there. All until the infamous last kilometer.

In that last kilometer the altitude gain is 400 m, more than half of the total of the all the trail. Don’t worry, you’re not going to have to climb, but it’s going to be difficult. Just take your time and know that the end is close.

After this last effort the reward is sweet. You’ll see the laguna and behind it, the Fitz Roy in all its splendor. This is the closest you can get to him without climbing. If you still have some strength, you can follow the laguna on the left to see the laguna Sucia. Although it is impossible to reach it, you still have a nice view from a distance.

Same length as the trek of laguna de los Tres but easier since there are no hard uphill part. You’ll gain some altitude at the beginning, until the mirador Torre (km 2.5). From here you can see part of the Fitz Roy but most of all the Torre peak. The rest of the trail runs through low bushes and a wood, barely going uphill.

Around the eighth kilometer, walking by the river, we had the incredible luck of making a special encounter: a family of huemuls. Huemuls are a kind of Patagonian deer, the population of which decreased so much in the past years, that they are now endangered. We managed to see a male, a female and a fawn, crossing the river, with calm. We later reported it to the enthusiastic park ranger. In case you see some, you should do the same to help them keep an updated database.

The laguna Torre is different from the one of los tres. First of all, when we arrived it was completely frozen. They were also some icebergs floating, a contribution from the glacier at the other end of the water. Once arrived at the laguna, you can either stay there or continue until a viewpoint over the glacier. In the second case, you have to walk over the right, on a part quite exposed to the wind. Differently from all the other moments in El Chalten, we had some difficulties in following this last part of the trail. At some point it looked like there were two parallel paths, one up and one down. We just continued until we could, and the view was indeed beautiful.

A long trail, starting behind the centro de visitantes. It has a total altitude gain of 1000 m in 10 km. Even though it may seem a lot, there are no very steep part. It is just a continuous normal climb. Your worst enemy in this trail is the wind.

This is the only trail in which the kilometers are not indicated. At the third kilometer you’ll encounter a well signaled crossing. Following the indication for the loma del pliegue tumbado you’ll enter a wood. But the last kilometers are done in a part completely void of trees. We arrived there when the gusts were really strong, so much that we had to stop several times to not lose our blance. We also had to stop to see the path since a lot of snow was flying around. Because of this we stopped just a couple of kilometers short of the viewpoint over the surrounding glaciers. We did not want to risk a sprained ankle the first month of the trip: we’ll have so much walk to do in the next months!

There are two miradores (viewpoints) behind the centro de visitantes: one over El Chalten and the other over the Patagonian steppe. The trail to reach them starts as one and bifurcate later. From the start you can already see how much you’ll have to go up: not much. In a couple of hours you can reach both of them, take photos and return. The view on the steppe is in our opinion the most impressive: the eye can move around so much without seeing any sign of man… just beautiful!

The trail starts at the same point as the one to the laguna de los tres. It runs parallel to the road, crossing it at several points. It is also very easy, without significant changes in altitude. After the short walk you’ll arrive to a really nice waterfall in the woods. This trail is also accessible by car since there is a parking just 500 m away from the end.

Why bonus? First of all because it is the only trek which is not free, you will have to pass through an agency. Second because it is not in El Chalten but in El Calafate.

Early in the morning they pass with a bus to your hotel in El Calafate. There is an option for you to get to the glacier by yourself which reduces a little bit the price of the excursion. In this case, you would miss some very interesting information about the glacier, as well as on the fauna and flora of the park, from the guide that rides with you in the bus. The bus also stopped to see the sunrise over the Argentino lake.

The entrance to the park (700 pesos) is not included in the trekking fee and is paid directly in the bus. After a while you’ll start seeing the glaciar, far in the distance. It’s an incredible emotion, that just keep getting bigger and bigger as you get closer.

The bus leaves you at the shore so you can take the boat. Even if it is cold outside, try to remain on the deck and enjoy the view. You will see the ice getting closer and closer, every cracks more defined and, with a little bit of luck some part of it breaking and falling in the lake.

Once on the shore you can leave your backpacks in a refuge and follow your guide. If you don’t have any gloves you will be given a pair.

A 20 minutes walk later, it’s time to put on the crampons! The guides will do it for you and explain how to walk with them. Nothing too complicated: you just need some practice. And just like that, you are walking on the ice! You will be in a group of less than 20 people with two guides assisting it. During the walk you cannot really stop and take photos for safety reasons. But the guides know where the best spots are and they will stop there for you to take millions of picture and enjoy all the shades of blue of the ice. The walk on the ice lasts one hour and a half and it is really an amazing experience!

After a lunch on the shore, you will take the boat back to go to the walkways. If you don’t pay for the trekking, this is the only part you are allowed to visit. You have a nice view of the 5 km of the ice front and you can also witness some ice breaking. Some of the ice breaks we saw were huge and impressive, and we were told it is like that everyday! For sure you will hear a lot of them since most are internal. A beautiful way to end an incredible trek.