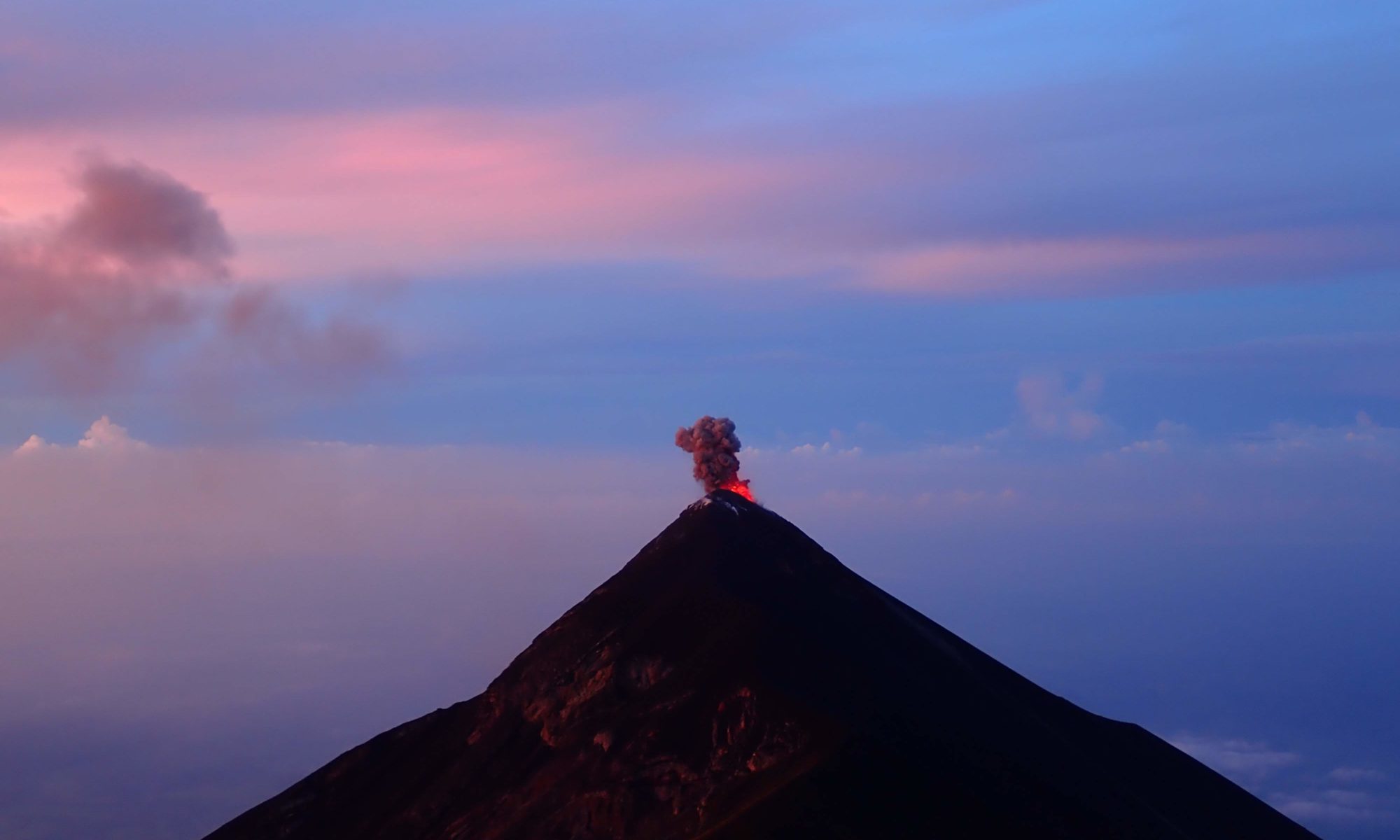 Among all the incredible spectacles nature gives us, the sight of an erupting volcano is one of the most humbling. In front of the earth trembling, the lava and smoke ejected, and the roaring sound, you cannot help but feel little and amazed. Unfortunately for the people that many times are negatively affected by these kind of phenomenon, volcano eruptions cannot be predicted yet. There are however some volcanoes that erupt frequently enough for them to be observed safely from the right distance. One of these volcano is the volcan de Fuego. To watch the explosions from a safe distance you have to get to the top of the volcano just in front: Acatenango.

You can reach the top of the Acatenango easily in one day and, if you wish, get down in the same day. However, doing so, you would miss the show of the bright red lava illuminating the night as well as the beautiful sunrise from the top. We strongly suggest for you to sleep a night on the Acatenango volcano to live this experience to the fullest.

Acatenango reaches 3976 m above the Pacific. Climbing to the top is not exactly easy, especially because you need to bring all the equipment and water. The walk will take you between 5 and 7 hours. Close to the top it can get really cold, with temperature dropping well below zero and strong winds. We, and many others, strongly suggest to go with a guide.

Thanks to our agency, we had to bring only water and thick clothes. We prepared a big and a small backpack, but the big one was still weighting around 10 kg! Imagine if you have to bring a tent, a sleeping bag and food!

There are many agencies in the surrounding area that offers the overnight hike. When you look for one don’t stop at the price: ask exactly what is included. Some does not include transportation of the tent to the camp base, some barely give you any food (and after the walk you’ll be super hungry), and for some the camp base is really far away from the top.

After our usual thorough check online we used the services of Gilmer Soy Tours. They are a company run completely by people from the area, and they offer a great service at a nice price. Your tent and thick sleeping bag are already waiting for you at the camp. Before starting the walk you are offered with a thick jacket for free. You should accept it, when you are watching the sunrise it is freezing! They also have other pieces of equipment for you to rent, like a useful walking stick. They provide abundant lunch, dinner and breakfast. And, most important of all, their camp is overlooking directly the volcan de Fuego in continuous eruptions and it takes less than an hour to walk to the top from there.

Don’t worry, you’ll never actually climb, just walking uphill. You’ll start the hike in the morning. The first part is really brutal: very steep, up to 30%, and with coarse black sand. We were at least lucky enough to walk inside of some clouds, otherwise the heat would have made everything worse. This first part is done among cultivated field. After a while you’ll enter a humid forest. When arriving at the real beginning of the trail you will be almost done with the hardest part of the walk. This part took us one hour to finish, and in more than one point we were desperate. We never gave up, thanks to our hard-heads and the guide encouraging us, most of all by saying how much was missing before it would get easier.

Only when the humid forest leaves place to pines the steepness becomes less pronounced. The last part is almost flat and the pines get more and more sparse, until they completely disappear.

We arrived at the camp after 4 hours, a great time! Especially because after 20 minutes we were there it started raining.

Our tents were all facing the volcano de Fuego. After dark, when the clouds moved, every ten minutes or so we could see an explosion. Bright red lava projectiles were launched into the air and they were covering the side of the volcano. Sometimes up to half of the cone was completely red!

But the rain clouds were not completely gone. Some of them were passing right behind the crater. The sky was then illuminated both by the lightnings and the eruptions. It looked like a competition for the louder noise. And a couple of times the lighting struck directly the crater!

At 4 am, we woke up to reach the top of Acatenango in time for the sunrise. The sky was clear and the Fuego was still erupting. The walk to the top is not really difficult, but sometimes, because of the sand it seems to go down more than up. Once you get close to the top you’ll be thankful of every layer of clothing you have. When we were there, there was 5 degrees below zero and quite some wind.

The view from the top is truly breathtaking. We could see not only the Fuego, but also many other volcanoes: the Pacaya erupting a quite stream of lava in the distance, the Agua, the three surrounding the Atitlan lake, the Tajumulco, close to the border with Mexico, and many others. We could also see the Pacific ocean, covered by the clouds. And all of this in a beautiful light of all the shades from red to yellow, passing by purple, orange… Simply amazing.

Once the sun was completely up, we got back to the camp, had breakfast and started our way down. It was quite quick, even if we were stopping from time to time to take some photos of the panorama we missed the day before because of the clouds. By lunch time we were back in Antigua.

Is it really safe?

If you don’t use the service of the guide, the walk and especially the night in altitude may be really dangerous. People underestimating the mountain a lot of time end up injured, or worse. That is why we stressed that going through an agency is really important in term of safety.

You might have heard that in June 2018 the volcan de Fuego erupted more violently, ending up killing people. We heard about it while we were preparing the trip, and decide to avoid doing the trek. We changed idea later, when a girl we met on the road assured us that it was safe, and amazing. The eruption was indeed powerful, so powerful that it changed the way the lava was flowing down the mountain. People in the villages at the base of the volcanoes underestimated the alarm from the authorities and ignored the evacuation order. After having lived all their lives with continuous eruption they thought this one was like the other ones. No tourist on the Acatenango died that day.

The perfect base for the trek is Antigua Guatemala. All of the agencies can pass and pick you up from your hotel, if you stay in the city center. Which is great news since Antigua is simply beautiful. It is an old colonial city, overlooked by the volcan de Agua. A lot of the buildings are in ruins, due to the frequent earthquakes. However these ruins just add a romantic flavor to the colorful houses and streets. The best thing you could do in Antigua is just walk around the city, enjoying it and relaxing before and after the fantastic trek to the Acatenango.

This website uses cookies to improve your experience while you navigate through the website. Out of these, the cookies that are categorized as necessary are stored on your browser as they are essential for the working of basic functionalities of the website. We also use third-party cookies that help us analyze and understand how you use this website. These cookies will be stored in your browser only with your consent. You also have the option to opt-out of these cookies. But opting out of some of these cookies may affect your browsing experience.
Necessary Always Enabled

Any cookies that may not be particularly necessary for the website to function and is used specifically to collect user personal data via analytics, ads, other embedded contents are termed as non-necessary cookies. It is mandatory to procure user consent prior to running these cookies on your website.