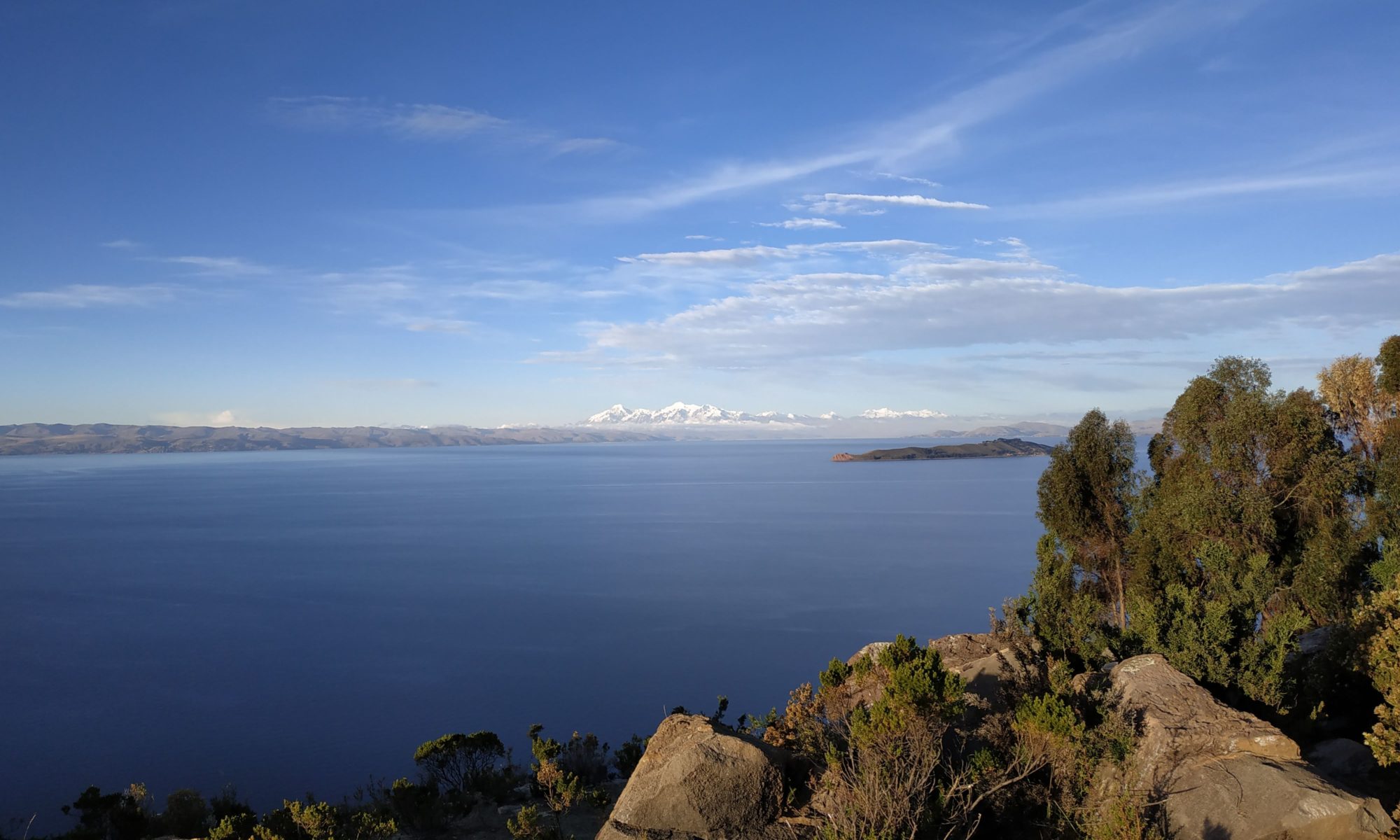 It is said that the first Inca, Manco Capac, was created by Inti, the god of the sun and emerged from the depths of lake Titicaca. He created the Inca civilization, establishing it in Cuzco.

With such a story, no doubt we wanted to visit this famous lake and some of its more than 30 islands. At 3800 m, lake Titicaca is the highest navigable lake in the world and it is situated at the border between two countries: Peru and Bolivia.

We arrived from La Paz to Copacabana. We didn’t want to stay more than necessary in that town so we made sure we would arrive on time to be able to take a boat for Isla del Sol on that same day. Boats depart for Isla del Sol every day at the same hours: 8 am and 3 pm, and they cost 25 bob per person. The ride is 1h30 long and it leaves you on the south part of the island, right at the bottom of the Inca stairs. Moreover, you’ll be charged 10 bob at your arrival to the island.

Before going on the island, make sure you have enough cash with you as there are no ATM there.

Since a couple of years ago it has not been possible to visit the northern part of the island as there has been some problems among the local communities. Nonetheless, while being there we met a couple of Argentinians that were staying in the north part of the island, coming during the day to the southern part. It has been several weeks already but they didn’t have any trouble. In any case, we didn’t want to push our luck and were not staying long anyway so we just stayed in the south part.

There are not many things to do in Isla del Sol. However it would be a shame to come only for the day as you would miss a beautiful sunset and a really peaceful evening. We decided to spend one night there.

When we arrived, after leaving our backpacks at the hotel, we started to walk toward the highest point of the island to enjoy the sunset. It is a 40 minutes walk, a good part of it in the forest. Very few people actually come here. Too bad for them, because the sunset was really beautiful.

Thankfully we had thought to take our frontal as there is no light to come back.

We visited the Isla del Sol exactly at the time of a 4-day celebration to the Pachamama, mother Earth. That included a lot of music, dancing, and drinking. Everyone is encouraged to participate and we were offered beer several time. Tradition mandates to spill a bit on the floor in honor of the Pachamama before drinking the rest and pass the glass to someone else. All the locals were wearing traditional clothes. It was not only really nice to see, but we also had a really good time participating.

One of the first thing you can see when arriving on the island are the Inca stairs. They are original stairs built by the Inca, with water running on each side until the bottom. If you decide to climb up the stairs, you arrive at a fountain were the water is supposed to give you eternal youth. Take the climb slowly, after all, we are high in altitude and you will be quickly out of breath. Of course, once at the fountain we drank some water and filled up our bottles. We will tell you in a few years if the water had any effect…

Visit the ruins of Pilko Kaina

After a nice walk outside of the village, along the water, you’ll arrive to some Inca ruins. They were an ancient palace built on the side of the mountain. However there are no explanations at all on site.

From Copacabana, Bolivia, it is possible to take a bus to Puno, Peru to visit the Peruvian side of the Titicaca lake. The ride lasts around 8 hours, including the time at the border, which can vary of course.

Puno is not a beautiful city but it is the starting point to visit the famous Peruvian islands on the Titicaca lake. After comparing all the options, we decided to take a 2-day tour to visit three islands and sleep on one of them.

The tour starts early in the morning with the visit of the Uros Islands. Those islands are famous as they are floating islands, built with totora (local reeds) by the Uros people. Despite everyone warning us that it is very touristic and not really authentic anymore, we were quite intrigued by how the floating islands were built.

When arriving on the island, a woman started to explain how the islands were created, which we found super interesting. The totora roots and part of the soil in which they are found are picked up in big blocks. Their density is so low that they float. Subsequently, several of these blocks are tied together to form a big platform. In the meantime, the plants and the leaves are put to dry. Finally, the dried totora is piled to form a walking surface over the platform.

The woman then invited us to visit their houses to see how they live. At that point, we started to feel a little uncomfortable. But then they started singing “vamos a la playa” and it just felt inappropriate. While part of the visit is indeed interesting, we had the feeling that most of it was a show put up only for us tourists.

We then moved to the next island, Amantani where we would meet the local family that would host us for the night. The hosting on the island is dealt with by the communities in a way that every family profits from it. Both the villages and families take turns to host the tourists. Thus, when you arrive there, you never know in advance where exactly you will stay. The houses are very simple and the comfort is limited but the families are usually very welcoming.

We arrived there for lunch and the wife of the family came to pick us up from the boat. She offered us a nice lunch that included a lot of quinoa and potatoes. We then joined the rest of the group to walk up the top of the island. We had the perfect spot to enjoy a beautiful sunset from the ruins of the Pachamama temple. At night, the community organises a party with a band playing local music and local dances.

The morning after we went back to the boat and headed to the last island of the visit, Taquile. We climbed up to the highest point of the island and walked until the main village. There, we could appreciate the fine Taquile textiles. Finally, we went to a restaurant to have some trout before heading back to Puno.

When you are visiting lake Titicaca, don’t forget to try the trout, one of the specialty of the area. They are quite tasty!