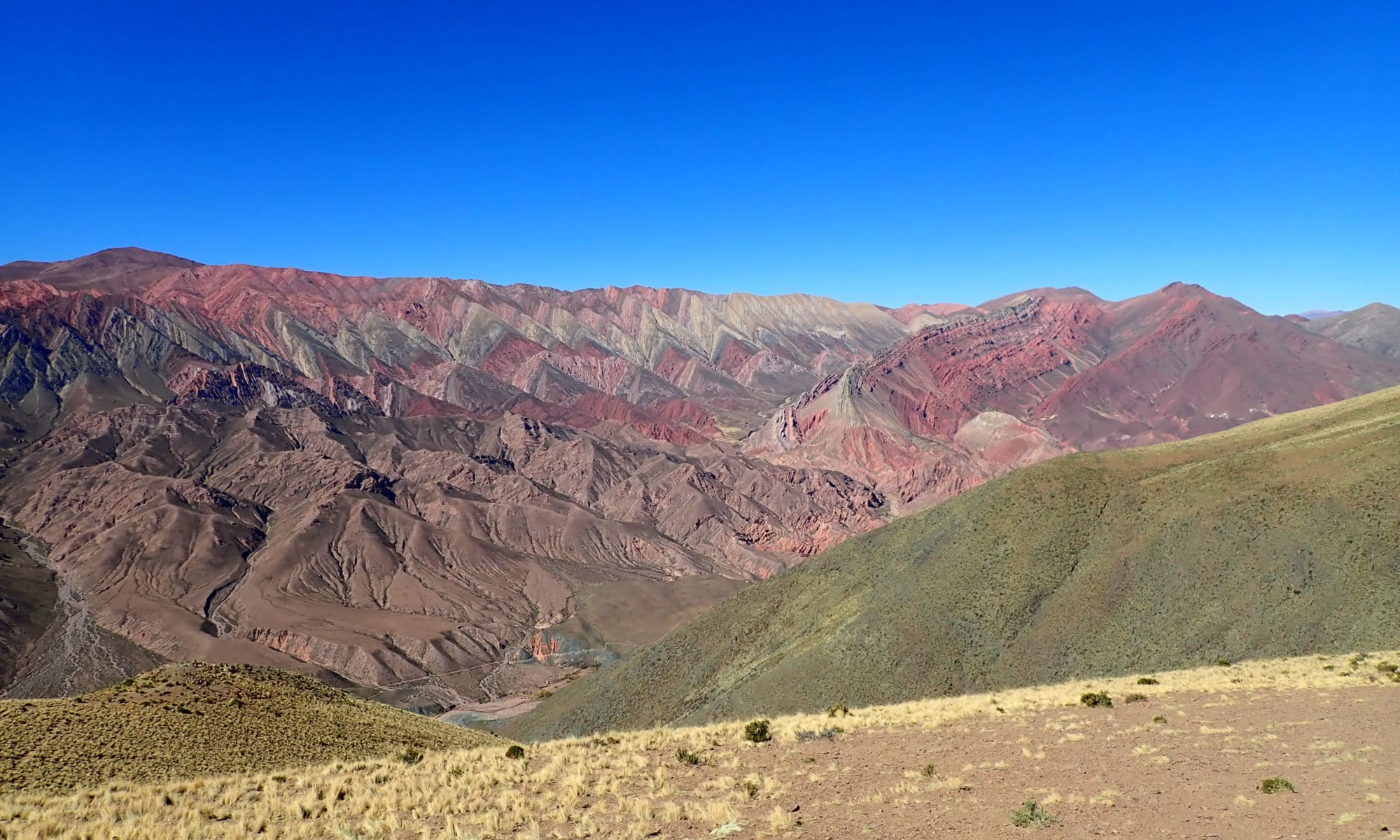 After living in a van in Chile, and before spending three days in a Jeep in Bolivia, we went back to Argentina. Here we discovered yet another fantastic region, different from the ones we already saw: the Quebrada de Humahuaca. Its small villages are surrounded by mountains of the most amazing colors. We made base in Tilcara, which allowed us to move around using only public transportation. If you want to rent a car you would instead need to pass by Jujuy, more in the south. The main villages of the area are: Tilcara, Purmamarca, and Humahuaca.

Tilcara is not only a nice base for visiting the area. The small town also offers some nice attractions. Not far from the city center you can find the only archaeological site of the Quebrada de Humahuaca: the Pucará de Tilcara. It is a pre-Incan village, composed of several houses. It was built on a hill so that the villagers could control all the  surroundings. Several houses have been reconstructed so you can understand better how people were living there. If you arrive at the top of the hill you will probably remain quite shocked. Some of the ruins were destroyed in more recent times, to leave space for a monument to the archaeologists that rediscovered the site… A real shame.

Included in the entrance ticket to the Pucará, you can also visit a botanical garden and a small museum. In the garden there are a lot of different varieties of cacti, but the most peculiar thing is, strangely, a big rock. When hit, this volcanic rock sounds like a big bell!

If you want to take a walk, or you have a car, you could hike to the Garganta del Diablo. If you follow us, you might remember that this is not the first Garganta del Diablo we met! The name is apparently quite common, or the devil has several throats. After a couple of hours of walking uphill among the mountains surrounding the village, you’ll arrive at a narrow canyon. You can then descend to see two waterfalls, one better than the other. In one of the two the jump is so high that the water gets away from sight before reaching the bottom!

Leaving the small bus station of Purmamarca behind us, we walked among the stands selling Andean crafts. After passing the village we took a path that led us among the cerro de los siete colores, the seven colors mountain. The sediments of different rocks create well defined stripes of different colors. The track gives you the possibility to reach several points of view over this spectacular formation, before returning to the village. The whole walk does not take long. It is better to do it in the early morning, in order to have the best possible light.

Seven colors were not enough for us! We decided to take it to the next level and for that, we headed to Humahuaca. Humahuaca is not only the name of the whole region, but also a village in it. Once there, you should go to the bridge over the rio Grande. There you can negotiate a price with some Jeep driver. We managed to get two other people to join us. After some haggle, we paid 50 pesos each, to which you need to add a 10 pesos entrance fee. Included in the price there is the return journey to one of the most spectacular mountains we have seen: the Hornocal, also called the mountain of fourteen colors.

We are not sure about the number of colors, but it sure is impressive. The Jeep stops at 4200 m, where a small track brings you to a panoramic view over several colored folds. You have some time to contemplate the view, so just sit and enjoy. But keep in mind that the small walk uphill to return to the parked car can be challenging: the air is quite thin over 4000 m!

If, after visiting the Quebrada de Humahuaca, you want to leave Argentina you could go directly to either Chile or Bolivia.

There are direct buses to San Pedro de Atacama passing from Purmamarca that wait for you at the border. Along the way you will pass by a big salt flat. If you want to visit it you will need to either rent a car or go with a travel agency. It looks very beautiful but we had another salt flat in mind: we wanted to arrive at the salar de Uyuni as soon as possible!

If you decide to go to Bolivia, you would need to take a bus to La Quiaca. Here you will have to walk to the border, and then take a colectivo on the other side to reach your next destination.

Arrived in Tilcara, quite tired from the trip, we were walking to get to our hotel with our big backpack. As usual, we were following the indications of google maps and maps.me. At some point, when in the Casanova street, a dog was guarding the street. We then stopped to look for alternatives. At that moment two other dogs arrived running and one of them gave a small bite on both of Caroline’s ankles before we could run away.

Luckily there was a hospital in town where she could get some aid. The hospitals in Argentina are completely free and they asked us only for a donation. Keep in mind that is not an excuse to not buy insurance before the trip! They told us that every year there is a vaccination campaign so there should be no problem. But we had to check with the owner in any case.

So we returned to the street, which turned out to be actually a cul-de-sac for the past year (the maps are not up to date!). We got help from the people of our hotel. We were in a car, the two of us, the mother of the owner with a stick, and the father driving… to go 200 meters away. Quite a funny view! In the end, after knocking at several doors, we had the confirmation that the dog was vaccinated. The worst moment of our trip, which happened  after less than two months on the road, was over.