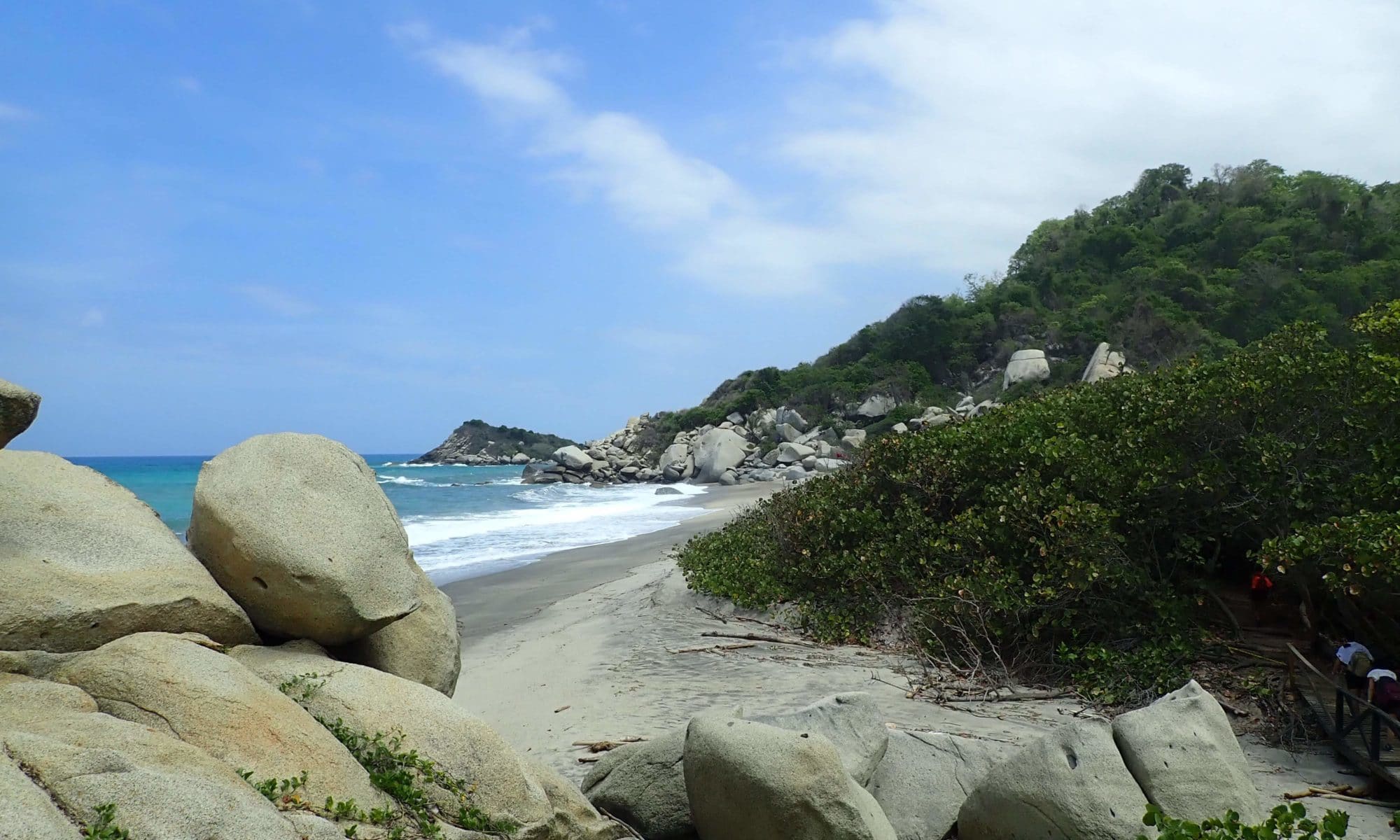 The northern coast of Colombia does not only offer one of the best colonial cities of the Caribe, but also a heavenly natural park: the Tayrona park. It is not far from the city of Santa Marta, a perfect base for the exploration but that does not offer much more. In the Tayrona park you’ll find a thick forest, beautiful beaches, an incredible amount of fishes and much more. The only way to explore the park is by walking, but you can also dive into its warm water.

The best and cheapest way to dive is to reach the small fishermen village of Taganga. Located at twenty minute from the center of Santa Marta, this village has been defined more than once as a backpacker heaven. Once there you’ll just have to choose the diving club you prefer and pay one of the lowest prices we have found in our trip. Take a look at online reviews first, just to be sure of the quality of the service.

Similarly to our dive off the coast of the isla del Rosario, the main attraction here is the coral reef. We have found it even more colorful and full of fishes! It might also be because we were more relaxed than during our first dives and thus we were enjoying it more. While the two dives are made in the park, the snack between the two is done on a sunny beach on an island just outside of it.

If you are staying in Santa Marta, check with your hotel if you can leave most of your luggage there. Bring with you only the strict necessary. Most of all, do not forget sunscreen, insect repellent, some snacks and lots of water! You will be able to buy food and drinks in some parts of the park. Even fill up your bottle, if it has a filter. But, in any case, the sun is really unforgiving so it’s better to bring some with you from the start.

There are two entrances to the park. The main one, El Zaino, lets you start directly at beach level. Instead the secondary one, Calabazo, offers the possibility to walk among the hills and jungle and to reach the beaches from above. The walk from Calabazo might get a little difficult, only because of the extreme heat and humidity, so be sure to start it early in the morning. Whatever one you choose, if you are arriving by bus, be sure to let the driver know your choice.

We started from Calabazo for different reasons. Firstly we wanted to walk in the jungle, mostly because there would be less people and a higher chance to see wild animals, like monkeys! Plus, we wanted to pass two days there, and entering from Calabazo would allow us to make a nice round trip.

Walking in the jungle

All our expectations about the walk were satisfied: we were basically alone, and we managed to see monkeys after five minutes. But we seriously underestimated the humid heat: we were exhausted!

Along the way there is Pueblito, an archaeological site of the Tayrona people. The site has been closed to the public for the last few years as it is considered a sacred land from the indigenous population.

Once you arrive on the top of the hill you will start to see the waves crashing along the coast. The last stretch downhill is really steep and you should probably avoid it if it is raining.

The beaches of Tayrona

If you started from Calabazo, the first beach you are going to arrive at is Boca del Saco, a nudist beach. Be careful, here, like in many other beaches in the park, it is forbidden to swim. The waves and the currents are very strong, so many have died.

At only twenty minutes from Boca del Saco there is Cabo de San Juan. It is one of the only two beaches where you can have a relaxing swim. Here you will also have the opportunity to eat and spend the night in a hammock or a tent. This is probably the most famous beach of the park. After the tiring walk, just snorkel, lay on the beach and enjoy the Caribbean life.

At a twenty minutes more there is the Piscina, the swimming pool. As the name suggests, this is the place with the most calm water you could find in Tayrona. And the view is incredible! White sand, surrounded by big rocks, and crystal clear water where schools of fishes swim around…

From the Piscina, along the way to the entrance of El Zaino, you’ll walk along the coast, finding more beaches. On all of these swimming is unfortunately forbidden, but they are a real treat for the eyes!

A night in a hammock

If you have the chance we strongly recommend that you spend at least one night in the park. Tayrona is one of the most visited destinations of Colombia, but most of the tourists stay only for the day. That means that around 4 pm the park starts to empty, and the beaches will get much less crowded. Plus, watching the sunset from the tower of Cabo San Juan is a fantastic experience! Lastly, you will probably wake up quite early because of the light and the noise. But that means even more time alone on the beach!

The price for two hammocks (with two lockers) in Cabo San Juan is the same as for one tent for two. Having suffered from the heat all day we decided to take the hammocks: what a night!

After taking back our luggage from Santa Marta, we decided that we needed some days of complete relaxation. We headed to Palomino, a small village along the coast, at the estuary of a river. Here you can relax on the beach, drink a coconut laying down on a bed, jump in the sea, or in the river. You can also ride down the river on tubs, but after having done rafting we knew we would get bored. Palomino is really a fantastic place to recover your strength after two beautiful, but intense, days in the Tayrona park.